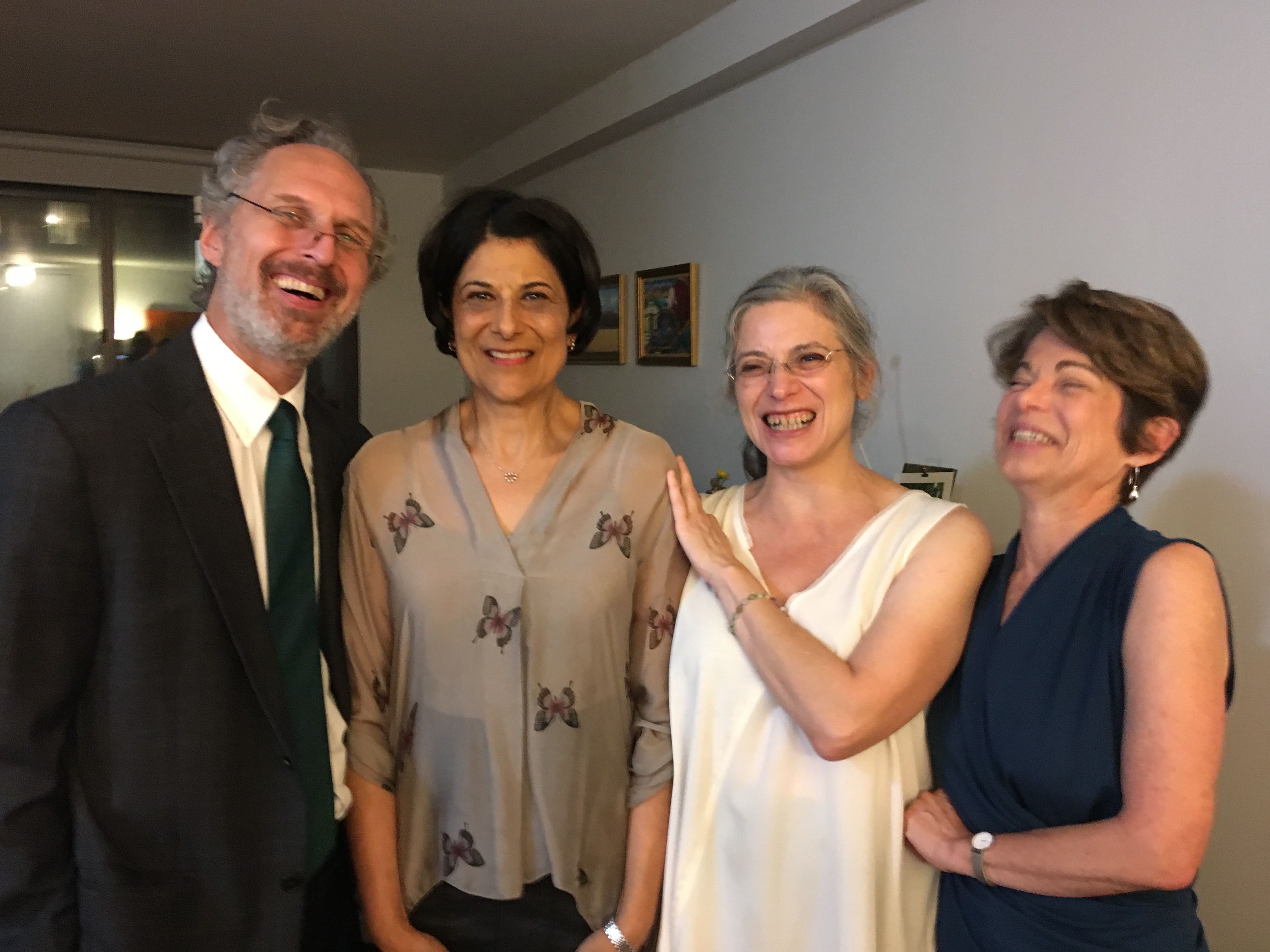 Last night, we kicked off the new season with a fabulous Groupmuse house concert on the Upper West Side of Manhattan.  Literally steps from Lincoln Center, we performed a program for about 25 people in a lovely, intimate setting.  For those who don’t know, Groupmuse is an organization that helps pair musicians and house concerts hosts.   A big part of Groupmuse’s philosophy is bringing neighbors together through music, so there’s socialization time before, during intermission and after every performance.  Our host, Sheila, had a lively assortment of people.  They gathered for about 30 minutes before hand.  Matt, Suzanne and I were hanging out in the bedroom, which was acting as our green room during that time.  At 6:30, Sheila introduced us and off we went. The audience was close….but honestly, not as close as our concert at 405 Shrader in San Fransisco.  At that performance about 60 people were packed into what had been a storefront, and the greenroom was the space under the grand piano where we stored our cases.   At Sheila’s Groupmuse, we had a bit more space though audience member Joshua could have tuned pages for me if he had really wanted to.

It was a house concert, but that doesn’t mean that we tamed down our programming.   We did start with a lovely and appropriate CPE Bach Trio Sonata, but then segued into Doug Anderson’s, Reverse Variations on Arkansas Traveler (with Jokes!, as the composer says).   An audience member told Matt afterwords that she cringed inwardly and thought “this could be awful” at the proposition of us telling jokes, but was pleasantly surprised that we told them so well.  Proof again that practicing helps!

At intermission, it was socializing time again.  Groupmuse concerts feel a lot like concerts up in rural Lille, Maine, where the intermission can last up to half an hour, because people come from long distances and want to have time to reacquaint themselves with friends.

Then we were back in for an all 21st Century second half. We began with Daniel Lemer’s Who knows? or ¿Quién Sabe?  for those practicing their Spanish.  This is a work by a young American composer, that employs a lot of extended techniques.  It takes turns being super edgy with a lot of harsh squeaks in the strings and multiphonics in the flute, to beautiful, serene harmonies that kind of unfold, not unlike Lux Eterna, by Ligetti.  And it rocks!  Then we gave a very unofficial premiere of Pamela Sklar’s Two Journeys.  We’ve performed the first movement before, but this is the first time anyone besides the three of us have heard the whole work.  This is a haunting and subtle work, and you should just come hear it, rather than have me describe it to you.

Finally, we finished with Eidos II by Jorge Amado, our 2018 8SW Composer Competition winner.   A big contrast with Pamela’s piece.  Joyful, vigorous and a bit primal.   I have to say, it was pretty loud in a Sheila’s apartment.  I wonder what her neighbors thought was going on.

After it was all over, we had a nice time meeting some of the audience members and sipping a little wine –– not to mention some really delicious bread!

Now we are getting ready to head to New Orleans to present this program, plus Siegfried Thiele’s Trio.  We will be working with some composition students at Tulane while we are there too, and of course, eating some beignets

If you want to catch this works, we will be playing them 4 more times this fall.  Check out our full schedule here. And you can read more about Doug Anderson, Pamela Sklar and Jorge Amado in our Featured Composer Section. Just follow the links above or click right here.

We're looking forward to this wonderful opportunity to perform tracks from our most recent album ...and nothing remains the same... For more information please visit the Croton Free

We're thrilled to be returning to the wonderful Salon 33 series in Princeton, NJ! Please visit here for details.

We’re thrilled to be returning to the wonderful Salon 33 series in Princeton, NJ!

We're very excited to be going to Southeast Missouri State University for a concert and their Fine Arts PATH Residency. PATH = Performing Arts Thrive Here! We'll be spending the

We’re very excited to be going to Southeast Missouri State University for a concert and their Fine Arts PATH Residency. PATH = Performing Arts Thrive Here! We’ll be spending the first few days giving workshops and working with SEMO students, and end with a concert for the chamber music series on Friday, March 24. More info coming soon!

For bookings, performance schedules, information, kindly contact us at 8stringswhistle@gmail.com ...or use the form below.

© 2019 Eight Strings & a Whistle | Site by Cahoots Design of Boston